It’s Fall and cherry tomatoes have lost their appeal, but Sunday comes every week and we Italians need a red sauce.  For most of my childhood, this meant meat sauce with meatballs and all sorts of “gravy meat,” such as beef and pork ribs, sausage and braciole.   (You’ll find my recipe for Sunday gravy under the post “Little Nonni’s Baked Spaghetti”).  While I’m not complaining (I looked forward to those meatballs every week), it was a bit boring.  This course was then followed by more meat (usually a roast, such as veal, lamb or pork cooked to death for at least twice the amount of time needed…no meat thermometers in our house!)  So when Bucatini all’ Amatriciana made it into my mom’s repertoire in the 1970s, I was quite happy.  It still has that hearty, meaty flavor of meat sauce, but is so much easier and quicker to make.  It was certainly much less intimidating for a new cook, such as myself, so I would watch her make it.  She didn’t have a name for it then, nor the correct ingredients as there was no pancetta to be had at that time, let alone Guanciale (pork cheeks/jowls), which is what most restaurants use now for this sauce and can be found in some specialty markets.  She used bacon ( which by the way, I still use sometimes), and “margarine,” of all things.   Over the years, I have made a few changes to her recipe ( got rid of the margarine, for one thing), and conferred with several different cookbooks to come up with a rich, earthy sauce that is delicious on any macaroni shape, but I usually stick with bucatini, as the people of Amatrice intended.  Yes, this pasta sauce is named for the town in Italy where it originated.  This small town is just outside Rome, so it can be found on most menus in Rome, as the Romans have tried to claim this for their own.  Don’t be fooled.

There are many versions of this recipe.   Even my version has many versions.  Sometimes I use some butter, sometimes not.  Sometimes I add prosciutto as well as pancetta.  Sometimes I use only bacon.  Most times I add wine (white or red) as it gives me an excuse to have a glass myself, but wine isn’t necessary.  Crushed red pepper adds a nice kick, but I don’t usually add it.  And certainly, you don’t have to use bucatini.  Spaghetti will do just fine….or any pasta shape, for that matter.  I’m going to give you my favorite version of this recipe, and then enjoy playing around with it yourself.  Who knows, you may come up with the next best version.  Just don’t let those Romans know, as will try to claim it for their own.  They still can’t get over that their Empire once fell!

4 ounces  sliced pancetta, bacon or guaciale, cut into small pieces (about an inch)

2 ounces prosciutto,  cut into small strips, about an inch wide

1 28 ounce can of Italian peeled plum tomatoes with juices, crushed by hand

1.  Put the oil, butter and onion in a saucepan and turn on heat to medium.  Saute onion until pale gold (about 8 minutes), then add pancetta and prosciutto (if using).  Cook for several minutes, only stirring once or twice.

2.  Add the red pepper and saute for a minute.

3. Add the wine.  Turn up the heat and allow the wine to evaporate a bit.

4.  Add the tomatoes and salt, and cook uncovered, gently simmering for about 25 minutes.  Taste and correct for  salt and red pepper.

6.  Toss pasta (either in the pan with the sauce or in a serving bowl) with the sauce.  Then add both cheeses and toss thoroughly again. 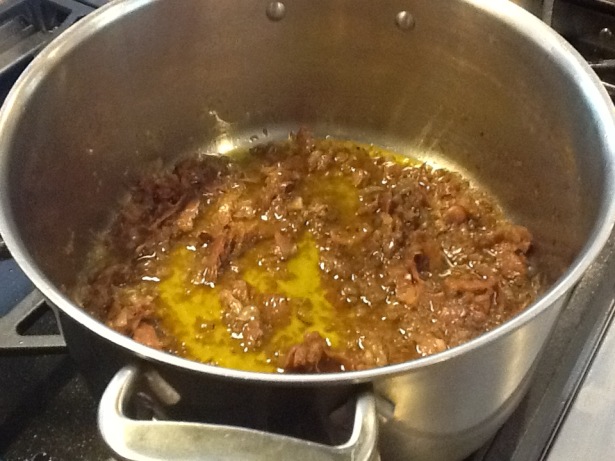 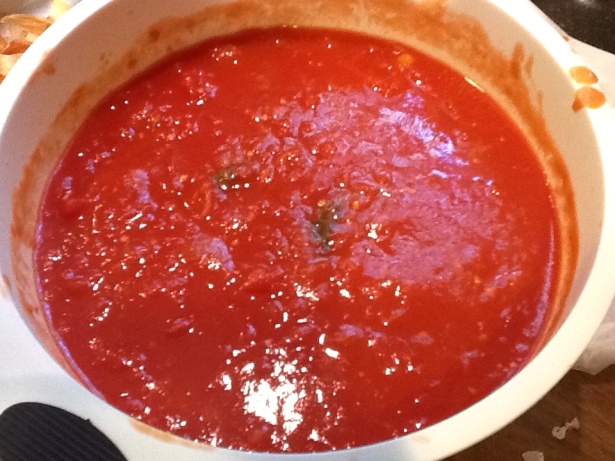 “With rare exceptions, all of your most important achievements on this planet will come from working with others—or, in a word, partnership.” ― Paul Farmer