My mother’s candied yams were the highlight of Thanksgiving for me each year.   I think this was true for most of our family, except my grandparents, who didn’t quite understand this dish. To them something this sweet and gooey was supposed to be dessert, not a side dish. While my grandparents were alive ( they both lived to be 103 years old), our Thanksgiving dinner was enough to put a person in the hospital from over-eating. Honestly, some years I really felt like I needed to go to the emergency room after this feast. We began at the table with my grandfather’s homemade mozzarella, still warm and right from the water in which it was made.   The next course was either Little Nonni’s baked spaghetti ( you can find that recipe in the blog archives) or her lasagna.   I’m not lying! Then out came the turkey and all the fixings.   Seriously? Any mere mortal would be full at this point. It was hard to imagine digging in to all this after all that. Nothing really excited me about turkey, stuffing, cranberry sauce, but I ate it, especially out of duty to my mother. This was her contribution to the meal and she worked very hard. I felt an obligation to her and the pilgrims. It seemed ridiculous to be eating spaghetti on Thanksgiving. It almost felt un-American. So we all managed to stuff ourselves even more.   Then one year out of the kitchen came these candied yams.   We all were so responsive to this new addition, that they became an important part of the Thanksgiving meal every year going forward, and they got better every year. She always brought them with her if the holiday wasn’t in her house.   We just had to have these yams.

Sadly the year came when she no longer cooked, and we had to figure out how she made them. She had never written the recipe down on paper. She knew it by heart. My daughter decided to tackle this dilemma one year, and she did so rather successfully. We tweak it every year in an effort to get it even closer to hers, and I think we are just about there…although not exactly.

We no longer stuff ourselves on lasagna or baked spaghetti. Once my grandparents could no longer come to Thanksgiving dinner, we sadly (but good for the digestion and waistline) replaced it with Tortellini en brodo.   The candied yams are still the highlight of this feast for me!

1.  Scrub the yams, but do not peel.  Place potatoes in a large enough pot to cover them with water.

2.  Heat to boiling and reduce heat to low.  Cover and simmer for abut 5 to ten minutes.  They should still be firm.

3.  Drain and let cool.  Once they are cool enough to touch, peel them.  Preheat the oven to 350 degrees.

4.  Slice in half width-wise, and then into about 2 inch slices.

5.  Meanwhile, melt the butter in a saucepan, and stir in the brown sugar.  Whisk until combined to make a syrup.  You can adjust the sugar or butter if needed.

6.  Line up the yams in the pans.  Drizzle the syrup over them.  Cover the pans with foil and put into a preheated 350 degree oven.

7.  Cook for 30 to 45 minutes, basting often.  The more you baste, the more syrup that will seep into the yams.

8.  Once the yams seem soft (not too soft)  and gooey (gooey is good), turn off oven; uncover and leave for another 5 minutes.

9.  Give the yams one good last baste before serving. 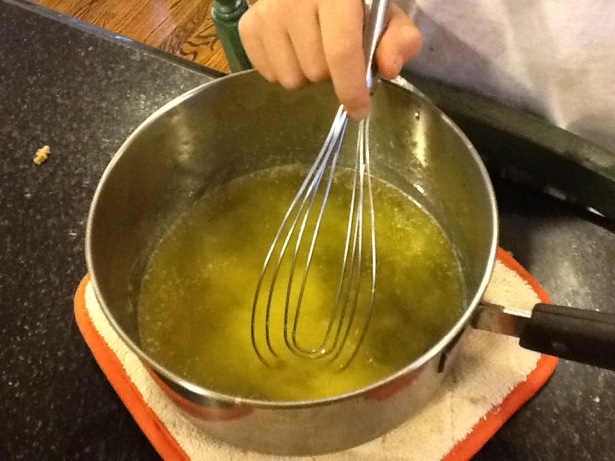 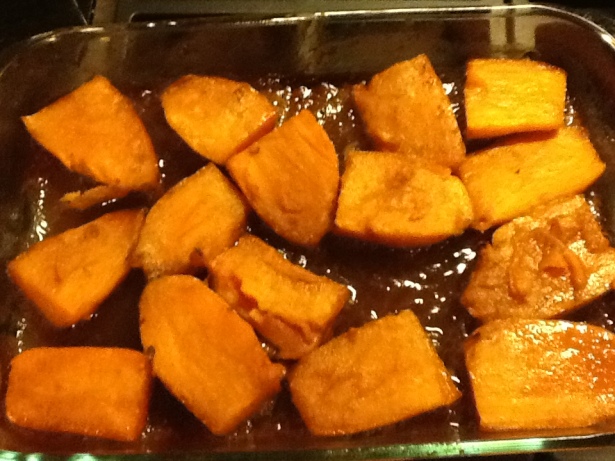