I’m not sure if I should categorize this dish as a soup or as a pasta, but either way, it’s a winner.  This dish saved our family Thanksgiving many years ago.  For the first 25 or so years of my life, we began our Thanksgiving feast as all traditional, old fashioned Italian families do, with Lasagna or “Little Nonni’s Baked Spaghetti (recipe can be found on the blog).  It was always a gastronomic challenge to eat a turkey dinner with all the trimmings after that, but we did.  Once my grandparents were no longer able to join us on Thanksgiving, my mother lightened up the first course considerably. It still had to be pasta, but at least it was less filling.  She would make a delicious chicken broth and then add tortellini to it for a delicious tortellini en brodo, and this became our new family tradition.   I hate to say this, but this got real boring, real fast….at least for me.  Every once in a while, my sister would bring pumpkin tortellini from New York City  (not easy to find anywhere else many years ago), and I was thankful (no pun intended) for the change.  But then one Thanksgiving, a welcomed change occurred.  My sister made this delicious soup of vegetables and pumpkin tortelloni that just screamed “Thanksgiving first course!”   My prayers were answered.  I was ecstatic.  No more tortellini en brodo!.  This could be our new Thanksgiving first course!!  And it was for a few wonderful years, but somehow, we reverted back to tortellini en brodo.  While everyone looks forward to it, I still am bored with it.  But I look on the bright side……I just eat a small bowl, and then there is plenty of room for the big meal.

Whether you try this as  a first course on Thanksgiving or any other day, or you serve it as a meal, which I do often, I think you will enjoy it.  As you will see from the recipe, it doesn’t call for much broth.  I think it was intended to be more of a pasta dish.  I add a lot more broth and make it more of a soup. Give it a try both ways and decide for yourself which way you prefer.  Also try various pumpkin filled pastas.  I love them all…tortelloni, torteliini and tiny ravioli stuffed with a delicious pumpkin filling.  There is a lot of room for personalization with this recipe.  It’s fun to play around with it and make it to your own taste.  Have some fun with it, and enjoy!

1.  This recipe says it serves 10, which would be true if you are serving it as a first course and don’t want any leftovers, which, believe me,  you do.

2.  It’s hard to say how many pounds of pasta is needed, as it depends on the the shape and size of the pumpkin-filled pasta you choose.  If you are using tortelloni, you’ll want to have 4 or 5 per person.  With tortellini, you’ll want more since they are smaller. And the ravioli depends on the size.

1 pound brocoli, the stems removed and the flowerets cut into 1/2/ inch pieces, about 4 cups.

3 cups chicken broth, but add more for a soupier dish.

1/2 pound (about 6) plum tomatoes, halved and seeded and cut into 1/2 inch lengths.  I prefer Italian canned tomatoes (6), cut or squished.

1.  In a large pot combine the carrots, broccoli, green beans, butter, olive oil and broth.  Bring it to a boil and simmer the mixture, covered for 3 minutes until the vegetables are barely tender.

2.  Stir in the tomatoes, pumpkin, salt and pepper to taste.  Return to a simmer, and cook for 7 minutes, or until the vegetables are tender.

3.  While the vegetables are cooking, in a large pot of salted water, cook the tortellini (or pasta of choice) until al dente, and then remove from the heat.

4.  Using a slotted spoon, transfer 4 or 5 tortelloni into each dish, and then spoon the vegetables and broth over them.  Sprinkle each serving with some of the parmesan cheese. 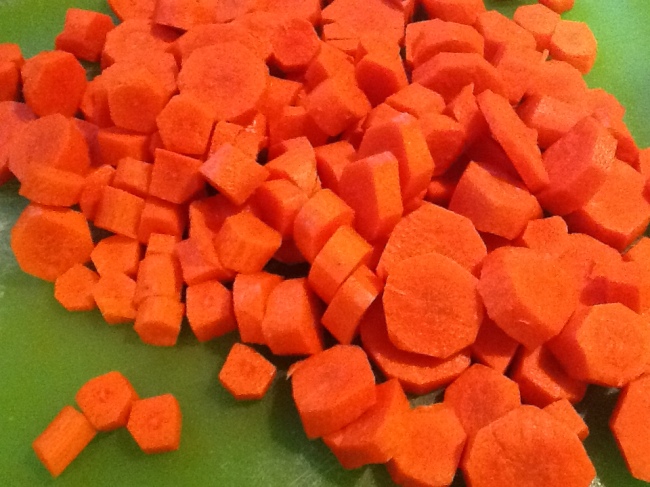 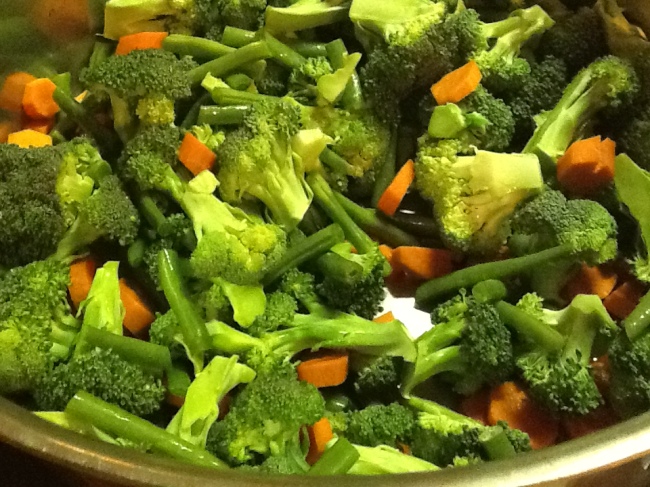